skip to main | skip to sidebar

It's that time of the year when SUSE/Novell developers use their Innovation Time-off to do a project of their interest/wish - called as Hackweek. Last week was Hackweek V. I worked on making the Common Internet File System (CIFS) cache aware, i.e. local caching for CIFS Network File System.

To make any network filesystem FS-Cache aware, there are a few things to consider. Let's consider them step by step (though not in detail):
Implementation

I wanted to get the prototype working within a week. So the way I have implemented it is rudimentary and has lot of room for improvement.

The index hierarchy is not very deep. It has three levels - Server, Share and Inode. The only way that I know of identifying files with CIFS is by 'UniqueId' which is supposed to be unique. However, some server do not ensure that the 'UniqueId' is always unique (for example when there is more than one filesystem in the exported share). The cache coherency is currently ensured by verifying the 'LastWriteTime' and size of the file. This is not a reliable way of detecting changes as some CIFS servers will not update the time until the filehandle is closed.

The rudimentary implementation is ready and the cumulative patch can be found here:

[WARNING: The patch is lightly tested and of prototype quality.]

Here are some initial performance numbers with the patch:

http://lizards.opensuse.org/2009/10/09/making-technology-previews-succeed-osc-09-unconference-session-notes/
Posted by Suresh at 10:11 PM No comments:

I'm heading over to Nuremberg on Wednesday (16 Sep) for a few days to participate in openSUSE Conference! This is the first-ever openSUSE Conference, an opportunity for openSUSE contributors to do/attend talks, workshops, Birds of a Feather sessions, and collaborate together face to face. The conference will be held from September 17 - September 20 in Nuermberg, Germany.

The interactive event aims to bring the openSUSE contributor community together to share ideas, experience, learn, hack and help to guide the direction of the project. The different tracks include Desktop Development, System and Toolchain (openSUSE Build Service, YaST, Kernel, Packaging), Community, Quality and Appliances (Moblin, SUSE Studio). There will be a lot of Fun in the form of Birds of a Feather (BoF) sessions, roundtable discussions, Unconferences and hackfests apart from scheduled talks.

I will be doing an Unconference session. The topic is "Roads Less Travelled - Making Technology Previews succeed".

Check out the full schedule here.

VIM tip of the day!

Ever wondered how to avoid VIM creating those annoying backup files like foo~ ?

Add the following to your vimrc:

LWN.net a leading online magazine which covers quite a bit of Linux Kernel development had quoted my name in the Security advisory on CIFS multiple vulnerabilities.

Frank Filz discovered that local users may be able to execute files without execute permission when accessed via an nfs4 mount. CVE-2009-1630

Jan Beulich discovered an issue in Xen where local guest users may cause a denial of service (oops). CVE-2009-1758

Wondering how did I miss this.. Pleasantly surprised.
Posted by Suresh at 7:06 AM 1 comment: 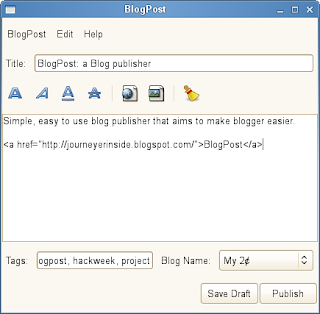 As part of Novell's HackWeek IV, I decided to learn and develop a GUI application that allows me to post blog entries quickly, without much effort (without using a browser).

Why I wrote this?
What it is , what it is not?
List of Features
Screenshot

Prerequisites:
Once you have the prerequisites installed, grab the BlogPost rpm from here:
(Currenly x86_64 and i386 rpms available)

The tar ball can be found here:
BlogPost tar ball

To install from source tar ball
I had Fun; Hope you'll like it!
Feel free to leave your comments, feedback!
Posted by Suresh at 10:46 PM 3 comments: